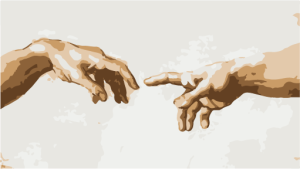 God’s first act towards human beings is to create man in His image. This is a very important concept in the Bible. Whereas the pagan gods have idols in their image, mankind is God’s image (the same Hebrew word is used to mean both “images” and “idols” throughout the Bible). Man bears the image of God and as such is imbued a certain level of closeness to God, a certain level of inherent value, a certain level of responsibility and power. Man is God’s crowning creation.

God’s first act towards man is calling the animals to man to see what man calls them. In the opening chapters of Genesis, God is curious about humanity and is eager to see what they do. Mankind quickly falls from grace. God expels man from the Garden, fearful that they will eat of the Tree of Life and live forever. God is responding and taking precautionary actions. Who knows what His new creation is capable of doing?

After mankind becomes more wicked than God had ever imagined, God floods the world in an effort to destroy everything (man, birds, animals, plant life). This is an ultimate act of desperation and disgust. God reverses His own glorious creation. His hopes are shattered by the very creature in His own image. But God shows mercy and, as a result, starts a new creation.

After the flood, God declares He will never again destroy the world because God has learned that mankind will always be evil from their youth. God has learned about His creation, lowering His expectations. God resolves to remain in contact with and to commune with His imperfect creation.

After failing to reach the whole of mankind, God singles out an individual through whom He can reach the world. God’s ultimate goal is humanity in relationship with Him. Abram (Abraham) is this man. God walks with Abraham and talks to Abraham. God tells Abraham about His plans, and Abraham advises God on God’s actions. God blesses Abraham materially and through rapid growth in descendants.

After Abraham’s death, God raises a fledging nation (Israel) under the protection of Egypt. When Egypt begins to oppress Israel, God again intervenes to save Israel in a visible and powerful way. All other nations from that point forward will have reason to fear the God of Israel. God shelters Israel as He leads them away from Egypt, leading through the sea and desert, feeding and guiding them.

God then forms and then presents an eternal covenant to Israel, detailing actions Israel must take and must not take to remain faithful to the covenant. Israel listens to the covenant and forms a pact with God to always be true to God. Moses acts as the mediator. God seals this pact with a personal luncheon with the elders of Israel.

But as soon as Moses is gone for a short time, Israel abandons God and the covenant they had just formed. God burns with wrath, and Moses must intervene to save Israel. God wishes to wipe Israel from the face of the Earth and raise a new nation through Moses. Moses objects that God’s purposes to impress and intimidate foreign nations will be thwarted. God agrees. Although enraged, God spares Israel. And this is not the only time this series of events occur.

Throughout Israel’s life, God’s relationship with them is tumultic. Even the name “Israel” means “struggles with God” (originally based off an event in which Jacob literally wrestles with God or an angel). But this name fits Israel for the duration of their existence. God engages in a series of blessings, curses, salvations, and appeasements. All of these fail in creating the righteous nation that God envisioned. Israel continuously violates their covenant relationship despite God’s best efforts. At one point, God laments “what more could I have done”. God has exhausted His toolbox of methods to reach Israel. They continually reject God, no matter what God does or tries.

Israel endures the Assyrian captivity and the Babylonian captivity. God uses Amos, Hosea, Micah, Isaiah, Nahum, Habakkuk, Jeremiah, Ezekiel, Haggai, Zechariah, Joel, and Malachi to spread His personalized messages to Israel about punishment, redemption, and a future hope. The message is tragic and compelling. Scattered through these writings, God impresses to Israel their status as a future priest nation. Through Israel, God would save the world.

As one last effort, God sends a Messiah (a Christ) to save Israel. Jesus preaches for 3 years and is, predictably, largely ignored. After Jesus dies and rises again, Israel still remains in rebellion against God. God turns to the Gentiles through an individual named Paul. Paul explains in the book of Romans that the Gentiles are now equal with the Jews. The Jewish rebellion has resulted in the advancement of the Gentiles. This is God’s last ditch effort to provoke the Jews to righteousness (in the words of Paul: through use of jealousy).

God’s grand plan to use Israel as a priest nation has failed. God has tried to build a people unto Himself, a nation of people with a special relation, a nation meant to be the light unto the world. This tragic turn of events may have delayed the end times, in which God plans to once again exalt the nation of Israel.

Ultimately, God plans to return to Earth and rule from Jerusalem. God plans a world in which the righteous live and the wicked are destroyed. God wishes to abolish pain and suffering and to live forever with a people of His own. All the nations of the world will come to God and worship in His holy city. In short, God’s relational nature is the story of the Bible. It is filled from end to end with God attempting to build a relationship with various people and nations. Often this ends in failure, but God presses through the failure with steadfast resolve.

The entire illustration of the Bible is one of utter commitment to a personal relationship to human beings. God attempts punishments and rewards. God attempts intimate appearances and utter abandonment. God attempts to reach the world through individuals, groups, and nations. God even sends His only son to reach the heart of mankind. Often this leads to heartbreak and disappointment in Yahweh, as He watches mankind repel Yahweh’s every advance.

A clear insight into God’s relational nature is through how God describes key individuals throughout the Bible. In Exodus 32 (see chapter 3), Moses stands in God’s way of destroying Israel. God changes His mind because of Moses’ intercession. Samuel intercedes for the people in 1 Samuel 12. Throughout the book of Samuel, the prophet Samuel has conversations with God. They exchange thoughts and feelings (see chapter 3). Both these men, Moses and Samuel, are given as prime examples of people who could sway God:

Jer 15:1 Then the LORD said to me, “Though Moses and Samuel stood before me, yet my heart would not turn toward this people. Send them out of my sight, and let them go!

Likewise, Abraham and David held personal relationships with God. Prophets, both small and great, converse with God and are blunt with God. In one such strange event (found in Ezekiel 4), God commands Ezekiel to use human waste to cook his food. Ezekiel objects. God instantly changes His requirements for Ezekiel and instead allows Ezekiel to use animal waste. God allows His commands to be modified, on the fly, by the desires of mankind.

Other times in the Bible, God has such high regard for individuals that he spares the lives of others as a result. In Ezekiel 14, we see the reverse. God is so incensed by Israel that no one except the righteous would be spared. This is a reversal of normal process:

Eze 14:14 even if these three men, Noah, Daniel, and Job, were in it, they would deliver but their own lives by their righteousness, declares the Lord GOD…
Eze 14:16 even if these three men were in it, as I live, declares the Lord GOD, they would deliver neither sons nor daughters. They alone would be delivered, but the land would be desolate.

Individuals can personally move God into actions that God would not have taken otherwise. The Bible highlights several exceptional people to whom God defers in the face of extreme passion. The message is that God values people. Certain individuals can move God based on whom they are and how they behave. God is not one to eschew advice. God is not one to believe that He only has the only right answers. God builds personal relationships.