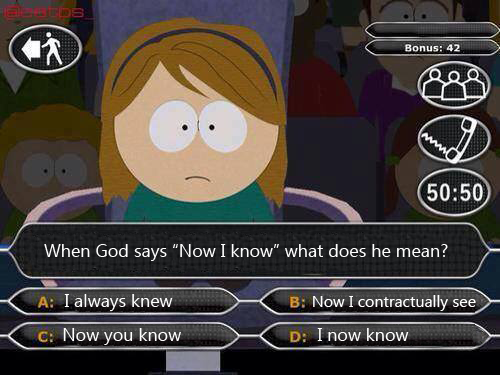 In Genesis 18, we find the story of when Abraham almost sacrificed his son by God’s command. God had commanded Abraham to kill his son. Abraham, although distraught, proved determined to obey God. God then stops the sacrifice at the last moment:

Gen 22:10 And Abraham stretched out his hand and took the knife to slay his son.
Gen 22:11 But the Angel of the LORD called to him from heaven and said, “Abraham, Abraham!” So he said, “Here I am.”
Gen 22:12 And He said, “Do not lay your hand on the lad, or do anything to him; for now I know that you fear God, since you have not withheld your son, your only son, from Me.”

This presents a problem to the Classical view of God. God is portrayed here as learning new information. God says “now I know” (as opposed to know before and not requiring the attempted sacrifice). Several attempts have been made for the Classical view to explain this. One such attempt is made by James Patrick Holding of Tekton. Holding claims that “now I know” is a figure of speech, binding a contract:

In the case of Genesis, we would again offer the conclusion that the “now I know” is a contractual seal saying what God has observed in response (in time) to a human act.

Holding quotes several verses in which he attempts to build the context that “now I know” is a “recognition” event. Several of the times this phrase appears in the Bible, the context is either ambiguous or detailing gaining information. Several of the instances are commands/imperatives and several are individuals speaking. Holding, himself, does not distinguish between the two.

Jdg 17:12 So Micah consecrated the Levite, and the young man became his priest, and lived in the house of Micah.
Jdg 17:13 Then Micah said, “Now I know that the LORD will be good to me, since I have a Levite as priest!”

Psa 20:6 Now I know that the LORD saves His anointed; He will answer him from His holy heaven With the saving strength of His right hand. [This seems to be a Psalm written by David in response to some event in which God gave help]

Jdg 18:14 Then the five men who had gone to spy out the country of Laish answered and said to their brethren, “Do you know that there are in these houses an ephod, household idols, a carved image, and a molded image? Now therefore, consider what you should do.”

1Sa 25:17 Now therefore, know and consider what you will do, for harm is determined against our master and against all his household. For he is such a scoundrel that one cannot speak to him.”

2Sa 24:13 So Gad came to David and told him; and he said to him, “Shall seven years of famine come to you in your land? Or shall you flee three months before your enemies, while they pursue you? Or shall there be three days’ plague in your land? Now consider and see what answer I should take back to Him who sent me.”

Jer 42:21 And I have this day declared it to you, but you have not obeyed the voice of the LORD your God, or anything which He has sent you by me.
Jer 42:22 Now therefore, know certainly [yada yada] that you shall die by the sword, by famine, and by pestilence in the place where you desire to go to dwell.”

In all cases, the individual in question is bringing something into their mind that may not have existed before. The imperatives are commands for people to think, always in response to provided information that could sway a decision. The one commanding is either unsure that the people were including this information in their decisions or bringing up new knowledge the individual did not have. People are responding to knowledge.

When the individual speaks about themselves, it never seems to be this “recognition” event. When the individual is speaking, they are learning new information. This makes sense; other people cannot be trusted to think for themselves so it must sometimes be pointed out to them to include information in their decisions. When people talk about themselves, it is a different dynamic. People know their own thoughts, and only say “Now I know” when they learn something new. They might have suspected in the past, but the new knowledge is confirming their thoughts.

The statement that “Now I Know” represents some sort of “contractual seal” is not a concept found in the Bible, although it is a better attempt to explain the text than calling it an anthropomorphism. In both the context of a self-referential statement and of an imperative statement it is a response to information. This is not what the Classical view wishes to portray God as doing. God is not being reminded of things He might not have known in order to think more clearly. And the Classical view does not want God learning new information. An “contractual agreement” idiom is just not supported by the context or other context of similar word use.

James Patrick Holding next includes texts which do not include the iconic phrase. Both Genesis 12:11 and 2 Kings 5:15 contain the English phrase “Now I know”, but the “now” is actually an interjection like “Hey”.

Holding mentions the Hebrew words are different, but fails to explain the meaning of the new word. In Genesis 12:13, two verse after the one used by Holding, the same word is translated “I pray thee” or “please”. This is not the same statement.